skip to main | skip to sidebar

Several years ago Steve and I decided to take a 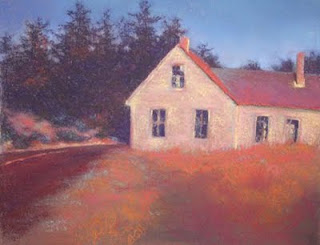 fall trip to northern Maine. I've written about it in previous blogs. In middle October we headed up the coast and made a late afternoon detour onto Campobello Island in Canada, which is across the bridge from the village of Lubec.
As it turns out it was the last day that the famous summer cottage owned by President Franklin Roosevelt was open to the public. We arrived late and had only a short time to see it all before the staff closed it up for the season. We were surprised at it's unpretentious size and furnishings.....and it's remote location. The cottage is not an easy destination even today, but in Roosevelt's time a ferry had to transport them across the bay because there was no bridge from Lubec to the island. After our hurried tour of the camp we drove around the island knowing there was only about an hour's worth of light left. Except for a few local families who remain there year around the island was deserted. We felt quite alone, but the autumn light cast a beautiful warm glow on everything..it's a spellbinding time of day and season ...and it seemed that we had the whole island to ourselves .
The narrow winding road took us through a little village where we stopped to take photos of this abandoned old farm. It stood precariously close to the road which wound around the corner and up over another hill behind it. The building appeared to be disintegrating into the ground and looked as though it would fall in at any time. We wondered what life had been like there when the place was built long ago. Across the road and out of frame was a cove with an old wharf and a view of Eastport across the bay. The former owners had been fisherman no doubt. Winters there must have been a challenge but just then, at that moment, the spot was lovely and so peaceful...It was easy to understand Roosevelt's affection for a place like this in summer.
Posted by klp at 7:47 PM No comments: 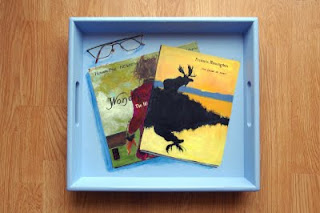 The "Tray Chic Auction Catalog" is up and most of the tray tables for the auction are ready for viewing...and bidding. The contributing artists put their hearts and souls into the furniture pieces this year which makes it so hard to choose from but I'm putting my money on two that really strike me.
At the last minute I decided to add my reading glasses to the tray before it was sent off. It's impossible to see much or paint without them, and that includes reading the books that I use for reference painted on the table top... so there you have it....Some of my favorite things.
Check out the other great tables in the catalog...the rest are on their way and will be posted very soon...Pick your favorite and make a bid. It's for a great cause because this museum encourages children of all ages(my age too) to explore and enjoy the world around us. The bidding ends in November with a dinner bash at the museum. Check the site for details.
The table was primed then painted with two coats of a high quality latex. The images were sealed with two coats of an acrylic sealer for protection. I signed the bottom of the tray and the table. Good luck with your bids!
Posted by klp at 10:20 PM No comments: